Indian Head Fraser Island | What You Need to Know

It is not hard to find out why tourists flock to the end of the 75 Mile Beach, the most easterly point of Fraser Island. Once you climb up to the top and stroll along the volcanic rocks, Indian Head awards you with 360° Panoramic views of Fraser Island’s ocean, smashing against the cliffs.

If you’re lucky, you can spot a bunch of sea life looking down into the ocean such as manta rays, turtles and even whales.

How to get to Indian Head Lookout

Indian Head is situated on the beautiful and adventurous Fraser Island.

Being an island, it is separated from the mainland and so you will need to cross over to it by sea or air. In addition, you will have to keep in mind that to get around Fraser Island you will need access to a 4WD since there are no roads on Fraser Island, only sand. An easier arrangement is booking a tour, popular with backpackers, which we’ll get into later.

Getting to Fraser Island by ferry/barge

There are 2 main areas you can depart from to reach Fraser Island, Rainbow Beach and Hervey Bay.

Rainbow Beach is a little chilled out town with a laid back, easy life vibe.

We stayed at Pippies Beach House which was filled with like-minded backpackers, offering private rooms and dorm rooms. Check out their latest prices here.

From Rainbow Beach, to access Fraser Island you will need to head to the Manta Ray Barge, around 14 km away from the centre of the town, where you will board with your 4WD (Either your own 4WD, rented or part of a tour). This will take you to the most southern point of Fraser Island.

It’s probably not the best idea to drive straight from there to Indian Head as it will take you half the day. It’s best to check out other places such as Lake McKenzie and get your campsite ready or check-in at your accommodation.

If Hervey Bay suits you more then head towards River Heads, south of Hervey Bay.

Departing from River Heads will mean you will get dropped off right next to Kingfisher Bay Resort on Fraser Island. It is a 4-star popular resort with swimming pools and luxurious rooms with amazing views.

It is better departing from here, especially if you are not part of a tour because Lake McKenzie is only a 30 min drive away. That’s more time to relax and enjoy the lake rather than sliding around on sand (although that is quite fun too).

Driving to Indian Head from Kingfisher Bay Resort will take you around 2.5 h, so it is a more realistic to check out Indian Head on the first day compared to leaving from Rainbow Beach and departing from the most southern point of the Island.

Getting to Fraser Island by air

If there is one way to get to Fraser Island in style it’s by plane.

The views will be ridiculously good and it would be an experience to cherish forever as you touch down on the golden sands.

It is going to be more expensive but it would be well worth it.

Enquire about some tour packages with Air Fraser Island who could organise your flight and 4WD once you reach Fraser Island.

If you are a backpacker or visiting Fraser Island for the first time then a Fraser Island tour is probably one of the best options.

If near Hervey Bay, check out our breakdown on the Fraser Island tours from Hervey Bay.

It will be stress-free and you will be shown some of the best spots the Island has to offer. The itinerary will be all sorted and there won’t be any arguments amongst yourselves about which left turn to take (or not pretending you’re lost). Fraser Island is unique and Google Maps won’t be accurate.

The best part is, you will meet fellow travellers and possibly make some new friends.

Regarding the tours, there are 2 main types to choose from.

For those who do not wish to drive or those that can’t drive…or those that don’t trust other random backpackers to drive them, then this is the option for you.

Most likely you will be taken around the island on a massive bus with tractor size wheels to get through the sand.

You will get dropped off at certain points throughout the day, hopping on and off. Although you won’t be driving yourself it’s probably the most comfortable option, as you are on a big bus with more room than in a car-sharing with other travellers.

Probably the option most backpackers want. You will be driving your own 4WD following the tour guide.

In our experience, there were 4 cars in total. The tour guide leading at the front, with 3 other cars behind filled with backpackers, 6 backpackers per car.

Each person gets to take it in turns driving around the island as they follow the tour guide to each spot, through sand and forest.

The experience was a highlight of our East Coast trip and we would recommend booking with Pippies Beach House located in Rainbow Beach.

We opted for a 3-day 2-night tag-along tour and had an unbelievable experience.

Because Indian Head is in Queensland, you’re pretty spoilt in that the weather will be good all year round.

Some parts of the year may be better for some people though, depending on your preferences.

Between December – February you will experience some of the hottest days in your life. Sometimes too hot. The humidity doesn’t help being high either.

However, this sacrifice will probably get you better rates on tours and accommodation as it is out of the peak season.

Between June – August the weather is more pleasant with some nice cool temperatures.

One major advantage of these months is that it is whale season. It would be incredible to spot whales on Indian Head during these times. It is the perfect viewpoint for it.

Due to all these advantages, the price will inflate because it is peak season. Expect to pay a little more on tours and accommodation.

Any other months outside of summer and winter are viable options and shouldn’t be a problem regarding the weather.

What to expect at Indian Head on Fraser Island

Indian Head, is by far the best viewpoint on Fraser Island.

For those of you wondering where the name came from it was apparently by Captain James Cook. The stories say as he passed the viewpoint in May 1770, he named it ‘Indian Head’ due to the aboriginal people he saw there. ‘Indian’ was often used for the native people of many lands in that time.

This is now the name as it stands today, taking over its original name of ‘Tuckee (stone)’ given to it by the native islanders.

As you park up after a sandy drive, you access Indian Head via an equally sandy walking track. It would be best to just walk it barefooted until you get to the top.

Once you get to the top you will see what all the hype is about. The surface is a red rhyolite rock formed by volcanic rocks over the years and is a perfect landmark giving jaw-dropping scenic views.

Feast your eyes on the whole of Fraser Island and take it all in as you stand on the most easterly point.

Indian Head is also the best place for wildlife spotting. As you look out into the ocean which crashes against the rocks, turtles, manta rays, dolphins and whales are often spotted.

Once you have done admiring the views make your way to the Champagne Pools on Fraser Island. It is a nice natural jacuzzi experience.

Can you see whales from Indian Head?

Yes you can spot whales during whale season, as well as turtles, manta rays and turtles.

How long is the hike up to Indian Head?

The hike up to the top of Indian Head will take no more than 15 min.

Fairy Pools Noosa | 4 Step Guide to Get There 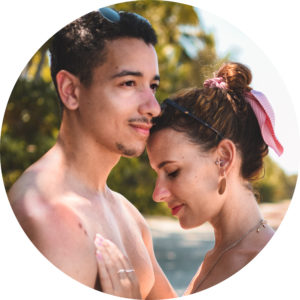